Since its creation, Roteiros de Charme has sought to develop the hotel business activity in such a manner as to relieve the impacts on the environment. In tune with the evolution of the concepts and models that point to the sustainability way of the touristic activity, the Association establishes the firm purpose so that its members as protagonists in their regions, supporting, encouraging, promoting actions that go beyond the simple offering of quality lodging. Each member of Roteiros de Charme undertakes the mission to develop their activities with high social and environmental responsibility towards the respective touristic destinations, getting closer to the ideal model of tourism known as geotourism.

The concept of geotourism was released by the National Geographic Traveler as “the tourism that sustains or increases the geographic character of a touristic destination: its environment, landscape, cultural and historical heritage, and the well-being of the resident population”. This concept, informally utilized since 1997, permanently entered the scene of international tourism through a study sponsored by the National Geographic Society in 2002.

The attributes of flora, fauna, landscape, architecture, dance, music, culinary, art, and the way in which all of this is experienced by the local population, confer to the destination its geographic character in a broad sense, something similar to a “geographic identity”. The touristic activity capable of sustaining and increasing the geographic character of the destination must, therefore, encourage the growth of local economy in such a manner as to improve the well-being of the resident population without degrading its identity, its cultural diversity.

The Sustainability Program of Roteiros de Charme, born under the inspiration of its Environmental Conduct and Ethics Code, aligns with the efforts required to set forward the ideal of Geotourism in each touristic destination. Besides the good practices of water and power conservation, waste reduction and recycling, responsible management of effluents and emissions in the hotel business premises, the members of Roteiros are committed to interact with their host communities through an infinite number of involvement manners, supporting initiatives of the local actors that may reinforce all the aspects of their “geographic identity”.

Besides the charm, inherent to its hotel business proposal, the associated hotels of Roteiros act as protagonists, aiming at the construction of sustainability of the touristic destinations in which they are located. 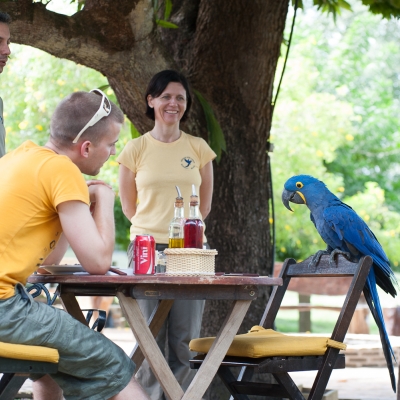 Become a "Roteirista" (Member of Roteiros)

You will become a ROTEIRISTA if, within the period of one year (12 consecutive months), you stay i…

The Tourism Program of the Technology, Industry and Economy Division (DTIE), of the United Nations Program for the Envi…