√The hyacinth macaw is the biggest Psitacideo on the planet. They may grow up until huge 100 centimeters of length with a wingspan of nearly 120 centimeters.

They are gigantic bluebirds flying. And that blue! The Blue Macaw is covered with the most vibrant blue feathers you have ever seen.

They have a huge, impressive beak, black with a yellow stripe on the lower jaw, and are known for being the most powerful of all the birds, having the power to break coconuts.

Native to the center-west, center and southwest of Brazil, Bolivia and Paraguay, the hyacinth macaw lives mainly in poorly wooded areas in the seasonally flooded fields, typical in Pantanal.

The wild macaws, also known as the Anodorhynchus hyacinthinus, live in pairs, family groups or flocks from 10 to 30 birds and eat a variety of fruit, nuts and seeds, flowers, leaves and plant stems, as well as insects and snails for protein. When the adult macaw mates, it is normally for the whole life.

They start reproducing around seven years old and if all goes well every second year. The female deposits one or two eggs, which hatch after approximate 29 days. The offspring are independent at nearly six months old. One of the remarkable characteristics of the hyacinth macaw is that, in spite of its large size and powerful beak, they are extremely gentle. Known as “gentle giants”, the hyacinth macaws don’t usually bite or become aggressive.

Although macaws are recognized as noisy birds, the truth is that it seems that this feature did not reach the blue macaw. In fact, they talk morning and evening, usually because in nature, this conversation is usually a way of determining where each family group is.

The hyacinth macaw is a spectacular bird, loved all over the world for its beauty and its personality.

Unfortunately, this amazing bird is in the Endangered Species list. Its numbers are dramatically small and all that can be done to save its species is a positive step.

The Araras Pantanal Eco Lodge has the honor to participate in a plan for conservation of the of the hyacinth macaws since 1990, by distributing artificial nests, planting manduvi and chimbua trees where, 75% of the natural hyacinth macaws nests are found.

As these trees need 55-60 years to grow to offer a cavity as a natural nest for the macaws, we distribute annually artificial nests in proximity of acuri palms, their mais food source.

We also plant acuri palms to ensure food. . In last five years we have three to four artificial nests active every year!

In 1993, there were 27 macaws that lived within the borders of the Araras Eco Lodge and its neighboring areas. Today they are more than 80. 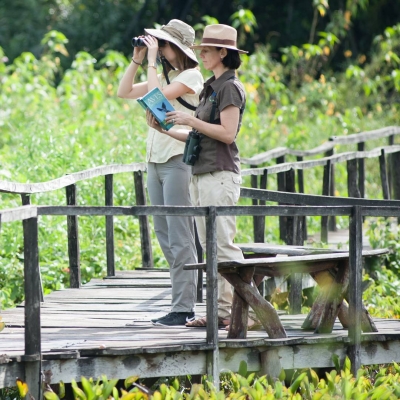 Establishment of 2.890 hectares of private reserve around the INN

Nearly 2.890 hectares of area were annexed to the Araras Eco Lodge, in which we follow the traditional activities of th… 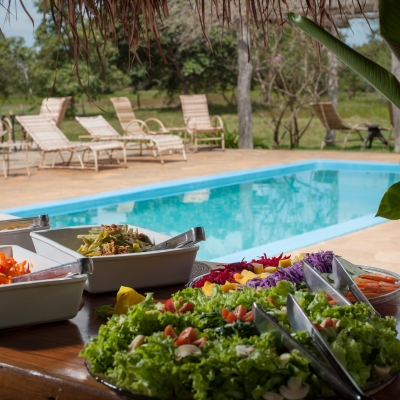 Control of the origin of food in the lodge

Dairy and meat products are produced on our farm. 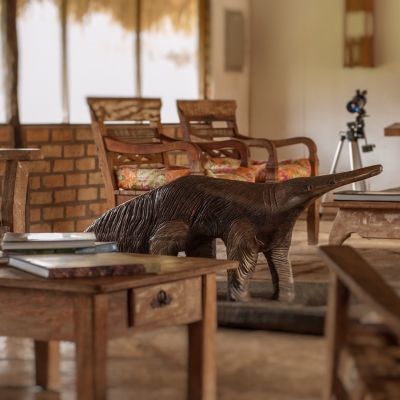 We utilize wood remains for decoration and furniture, and support local handcraft (wooden frames round the doors and wi…